Aim: Look at the work of Elizabeth Blackadder and build works from still life.

Method: For your own still life, pin up coloured fabric or card onto a wall or door. Suspend or pin light, brightly coloured objects onto the fabric. Gift bafs or paper lanterns work well. Enjoy the juxtaposition on bright colours and details. Make several drawings in colour, selection areas and elements and refining to explore the composition. Try bringing some lines or shapes in from the edges; lay a sheet of paper behind the one you’re working on so that you can befin drawing off tahe page and enter the drawing from the side.

It was very inspiring to see the work of Elizabeth Blackladder. I like Matisse and both of them have this intimate relationship with the subject and the exploration of bright colours. Matisse brings me joy and energy and Blackadder’s work is as colourful but very calm and sentimental. I particularly like the lack of background in many of her compositions. My drawings started as studying the objects I had pinned up on a board, drawing and colouring them carefully. I used watercolour, pastel pencils and acrylic,  but as I progressed it became more important the space rather than the objects. I sketched a few juxtaposition combinations I wanted for this project and without even thinking much about it, I had the feeling of cutting and pasting the shapes. It might be the inspiration of looking at Matisse’s cut up patterns, I don’t know.  I had the fully object shape cut and out of the paper edges before trimming it to fit the paper boarders.  It helped to accommodate what I want in the page and it shows what I wanted to show for the final piece in a framed manner. As I progressed, space became more important in my compositions. I want it simple, beautiful, colourful and calm.

The difference and similarities  between Elizabeth Blackadder and Henry Matisse

Henry Matisse was a  French artist born in 1869. Matisse initiated an was the leader of Fauvism movement. His art was influenced by Paul Cezanne, Gaugin, Van Gough, Picasso and Paul Signac. Henry Matisse is know by his use of bright colours and although he painted started his career doing landscapes and still life, human figure became his central interest. After he became ill he start creating art work with big cut up pieces of colourful paper forming patterns and human figures. He was also interested and other cultures arts, specially Japanese. 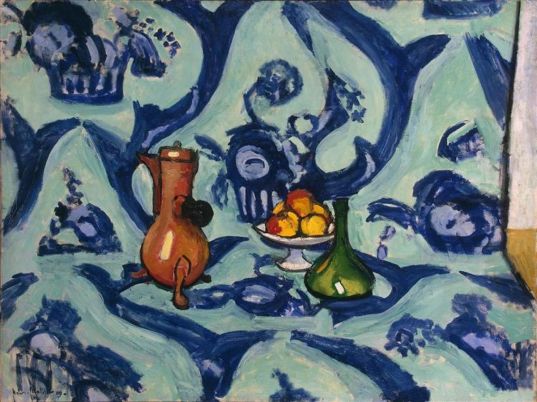 Elizabeth Blackadder is a Scottish artist born in 1931. Her mediums are painting, etching and screen printing. She travelled extensively for art interest purposes and became very found of Japanese objects and art. When Elizabeth travelled to France she discovered Henry Matisse who she is highly influenced by. Her paintings central ideas are still life

; particularly flowers and cats. Her compositions can be of loose elements and no background, and spatial arrangements in 2D shapes without shadows. 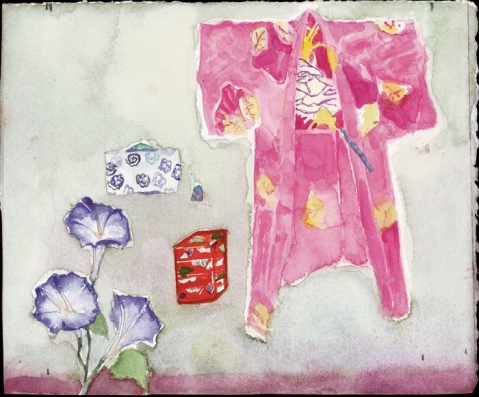 The image below is an attempt in  response to Matisse’s work  sophisticated use of space and pattern.

A La Matisse still life – acrylic on A3 size paper